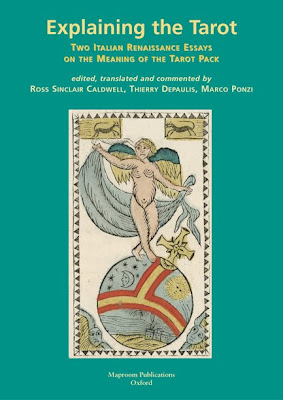 A must have: "Explaining the Tarot – Two Italian Renaissance Essays on the Meaning of the Tarot Pack", edited, translated and commented by Ross Sinclair Caldwell, Thierry Depaulis and Marco Ponzi. From Maproom Publications.

"The symbolism of Tarot cards has intrigued people for five centuries. In this volume, two Italian authors of the 16th century, one known, the other anonymous, interpret the meaning of the Tarot trumps and the suit cards from a variety of interesting perspectives. Drawing from philosophy, religion, poetry, contemporary science, and the rules of the game itself, while at the same time offering examples from history and current events, the authors describe a series of images that for them is more than a game. They find that the symbolism of the cards, and their order, offer moral lessons and a wholesome guide to the ultimate purpose of life, which is to seek God. Their two discourses on the symbolism of the Tarot cards, here edited and translated into English for the first time, are the earliest ever written, and offer a rare glimpse into the other side of the game of Tarot in its first centuries – the meanings people saw in the pictures on the cards." -Ross Caldwell

One word: Awesome. The above quote + other important and very interesting Tarot stuff here: Ludus Triumphorum

One Response to Explaining the Tarot