This post is about new tarot books that I’ve recently acquired. I hope it will wet your appetite and make you spend even more money on tarot books. Part 2 coming up in the not-too-distant future, with Enrique Enriquez’s Tarology, Abiding in the Sanctuary by Tali Goodwin & Marcus Katz, Mary K. Greer’s Who Are You in the Tarot?, and Marcus Katz’s Tarosophy.

David, Jean-Michel: Reading the Marseille Tarot (Association for Tarot Studies, 2009. Paperback) J-M. David is one of the founders of the Association for Tarot Studies, the creator of Tarotpedia, and editor/publisher for a small number of books for the ATS. His academic background is in Philosophy (which he has also taught at University), and is currently teaching in a High School and in a Steiner Adult Education institution.
“A self-paced tarot course based on the Jean Noblet 1650 Paris deck arose out of course materials written for an online 30-week tarot course.” A big book, both in its size (A4, 535 pages) and content. While reading this book there’s been a recurring thought in my mind: “I wish Jean-Michel had been my history teacher at school.” There’s just so much information on symbolism, iconography, history, philosophy, politics, religion, art, tradition, lots of pics and lots of comparisons between decks, that I think I’ll be going through this tarot course over and over again.
And what J-M. has the most – and which shines like a beacon throughout this work – is wisdom. This is not about presenting loads of data for its own sake, but getting to the core of it: what it means and what you can learn about yourself through understanding it, as presented in a ‘simple’ pack of cards. Plus the fact that it’s not like we’d have too many english language books on the Marseille tarot.
Although this book clearly focuses on the Major Arcana or trump cards, there is additional information on pip cards and other topics as well. These include chapters on: [3] The Pips; [6] The Courts; [9] Number; [11] Virtue; [18] About Readings, Eschatology & Metaphysics; [20] Elements & Alchemy; and [23] Astrologos.
Random yummy bit: “Conversely, the Bateleur, as master of the elements of his trade, is utterly effortlessly focussed on his dexterous activities. In contrast, the Papesse may be utterly oblivious to the physical to which her awareness may be temporarily as asleep. In his hands the Bateleur exercises his will, whereas in her hands the Papesse allows the will of the spirit to move.” (p. 71) 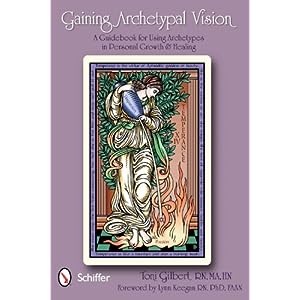 Gilbert, Toni: Gaining Archetypal Vision – A Guidebook for Using Archetypes in Personal Growth & Healing (Schiffer Publishing Ltd., 2011. Paperback, 128 pages). For over twenty years, Toni Gilbert has used insight-producing modalities such as Tarot, astrology, dream interpretation, and other shamanic tools to enhance her life and her alternative nursing practice.
I first came to know of Toni Gilbert through her first book, Messages from the Archetypes, with its lively case stories and ‘upper/lower level’ interpretations of the cards. To me this book is, in short, Tarot Healing in the flesh.
Toni’s new book, Gaining Archetypal Vision, feels very much like a Part 2 of the Messages, where you get to know the inner mechanics of healing via archetypes, whether you then connect it to tarot or any other system. As the title suggests, this book is not about tarot per se, but on ‘living archetypes’. What I love most about this book is the fact that you can easily see Toni has a deep understanding of the human psyche and archetypes – and she can present the information clearly and in an entertaining manner. Even though the book only has 128 pages, don’t let it fool you – there’s a lot of Stuff in it.
While reading through Archetypal Fundamentalist / Conservatives / Liberal and Spiritualist, I couldn’t help making comparisons with tarot (ok, I was doing that throughout the entire book). And that’s one of the nice things about this book; whatever your ‘tool’ is (provided it’s somehow related to understanding the human life) this book will spark new ideas about how to use your own toolkit. And seeing Maslow’s hierarchy of needs sitting side by side with the classical Chakra system ‘spiced up’ was just the ‘rad Toni’ I was expecting!
Chapters include: [1] Archetypal Vision; [2] Archetypal Thought as Inheritance; [3] Archetypal Growth and Development; [4] Health as Expanding Consciousness; [5] Archetypes of the Community; [6] Archetypes and Patterns of the Archetypes; and [7] Archetypal Tools for Healing in the 21st Century.
In addition, there’s the wonderful Introduction: The Unfolding of an Alternative Nursing Practice where you feel like you’re walking with Toni as she tells you her own story and how archetypes came to (her) life.
Random yummy bit: “No religion or scientific study truly explains how our world works. Thus, what we can ultimately know may lie in our ability to observe archetypal patterns in their unique expressions. As we become familar with the archetypal effects upon our world and our lives, the more we come to know ourselves. The better we know ourselves, the more comfortable we will feel in the company of others. All in all, the knowledge that we gain from observing the archetypal system makes us more aware. And as we learn to make use of the archetypes, we’ll enhance our personal and social life, at home as well as in the world at large.” (p. 32-33)

One Response to Tarot Books, part 1